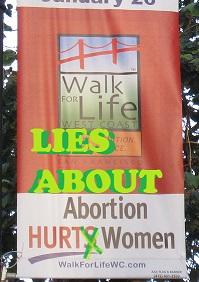 We are shocked to see banners falsely claiming that “Abortion hurts women” hanging from the City’s lamp posts on Market Street in San Francisco. This statement is false, and harmful to women and girls.  The display contradicts City policies and practices. We call on the Mayor to take the banners down.

Access to legal and affordable family planning health care services including abortion has been critical for expanding economic, educational and professional success and emotional satisfaction for women, the men and children in their lives and for communities as a whole. Denied abortion care can perpetuate poverty.

The best birth control can sometimes fail. About 1 in 3 U.S. women have at least one abortion.

According to the American Congress of Obstetricians and Gynecologists, abortion is one of the safest medical procedures. The risk of death from carrying a pregnancy to term is 13 times that of abortion in the U.S. (1)

Too many women routinely lost their lives from illegal abortions before 1973. Today, deaths from abortion have all but disappeared.

Campaigns to defund and stigmatize abortion, and impose repressive views about sexuality, disempower and subordinate women and girls, and prevent them from choosing and using the vital reproductive health care services they think best.  Their tactics include violence against abortion providers, and harassment of patients at health centers. These actions hurt women and girls.

3. San Francisco must preach what we practice.

It is further troubling that these lies are posted just outside of major commercial institutions, including See’s Candy, First Republic Bank, Wells Fargo Bank, and E-Trade, implying that these institutions believe that “Abortion Hurts Women.” We hope that they do not.

The banners violate the City’s own regulations, because they display an inaccurate date for the related event, and the event is not of interest to a significant portion of San Francisco residents. The event is mainly attended by residents bussed in from elsewhere. The City should improve and enforce these rules.

San Francisco’s elected leaders should take a stand against this statement that lies about public health. They should advocate proactively for public health policies and services that encourage women’s right to choose the best course for their own reproductive health. This stand should include support for the federal Women’s Health Protection Act.

We call on the City to Take Down the Banners.

The City has grounds and precedent for limiting and redressing harm from hateful and discriminatory speech. There are good legal examples of countermeasures the City has taken in expressions of discrimination against LGBT people and Muslims. (see below)  We must pursue such a course now.

San Francisco Board of Supervisors Resolutions

San Francisco Board of Supervisors

[Commemoration of Roe v. Wade Anniversary] Resolution commemorating the 40th anniversary of Roe v. Wade and commending the work of pro-choice advocates and service providers in the City and County of San Francisco.

Resolution urging Cardinal William Levada, in his capacity as head of the Congregation for the Doctrine of the Faith at the Vatican, to withdraw his discriminatory and defamatory directive that Catholic Charities of the Archdiocese of San Francisco stop placing children in need of adoption with homosexual households.

Resolution condemning upcoming rally to be held by anti-abortion groups in front of City Hall on Friday, March 24, 2006. http://www.sfbos.org/ftp/uploadedfiles/bdsupvrs/resolutions06/r0180-06.pdf

One thought on “Lies About Abortion Hurt Women”