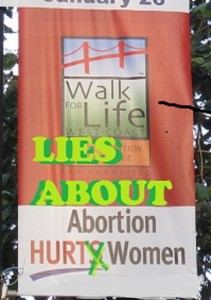 Banners falsely claiming that “Abortion hurts women” are hanging from publicly managed lamp posts on Market Street in San Francisco. The banners are displayed in the City’s lowest-income communities, which experience the highest rates of low-weight births, and emergency room visits for pregnancy. (1)

The prominent display of this false anti-abortion statement on public property misinforms the public about our health. It undermines women’s personal and private medical decisions, and thereby undermines public health. It also misrepresents the City’s previous support for reproductive health, rights, and justice, particularly for our most vulnerable communities.

Abortion is one of the safest medical procedures in the United States. The risk of death is 12 times higher for carrying a pregnancy to term, compared with abortion. (2).

Women and girls have the right to decide whether and when to have children. Public policies and services must support that right.

Access to legal and affordable family planning health care services, including abortion care, has been integral to expanding opportunities for success and satisfaction by women and girls in the emotional, economic, educational and professional spheres, as well as for the men and children in their lives and for communities as a whole.

One in three American women will have an abortion by age 45, and 95% of heterosexually active couples have used birth control.

2. State and federal legislation increasingly aim to defund reproductive health care services and limit the rights of women and girls.

Campaigns to stigmatize and defund abortion impose repressive views about sexuality, disempower women and girls, and prevent them from choosing and using the vital reproductive health care services they think best. Tactics include legislation, violence against abortion providers, and harassment of patients at health centers. These actions hurt women and girls.

3. San Francisco must protect and advance the public’s health.

We are proud that San Francisco and California have strong policies to assure women’s reproductive health rights.  In January 2013, the City and County of San Francisco commemorated the 40th anniversary of Roe v. Wade and commended the work of pro-choice advocates and service providers in the City.

But the public must be able to trust and rely on the City to provide accurate, credible information in order to safeguard our health.

We are shocked to see banners falsely claiming that “Abortion hurts women” hanging from the City’s publicly managed lamp posts on Market St. in San Francisco. This statement is false, and harmful to women and girls. The display contradicts City policies and practices.

1. Publicly oppose the deliberately false anti-abortion messages on the banners hanging on Market Street, oppose the views of the rally to be held by anti-abortion groups in San Francisco on January 24, 2015, and advocate proactively for public health policies, services and messages that encourage the right of women and girls to choose the best course for their own reproductive health.

2. Review the permitting process for banners to require that public health statements are scientifically accurate or limit banners to the name, date and location of the event being advertised.