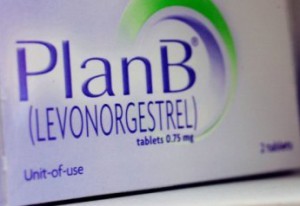 My commentary from The Huffington Post, “We Are All an 11-year-old Girl — And She Is Pissed” by Ellen R. Shaffer, about Secretary of Health and Human Services, Kathleen Sebelius ‘ decision to veto the FDA’s approval for the over-the-counter emergency contraception (EC) product Plan B One-Step , commonly referred to as “the m0rning-after-pill”, without age restriction:

Women are the last remaining voting majority who are treated like a splinter group.  It will stay that way until we stand up for ourselves, together, and demand power.

The Democrats drove us away from the polls in 2010, and they’re getting ready to do it again.  It’s okay, though.  They need to focus on creating jobs.  We don’t want to disturb them with anything controversial.

The Republicans don’t care whether or not we experience regret after our abortions.  They want to pump up the fanatic religious extremists who they hope will give them control of the Senate and the White House in 2012.

The pediatricians, gynecologists, and adolescent medicine doctors deplore the decision yesterday by the secretary of Health and Human Services to override:

“An evidence-based decision by the Food and Drug Administration (FDA) to approve an application for over-the-counter access without age restriction to the emergency contraception (EC) product Plan B One-Step.

This move defies the strong data that EC is safe and effective for all females of reproductive age. As advocates for the health and well-being of all young people, the AAP recommends that adolescents postpone sexual activity until they are fully ready for the emotional, physical, and financial consequences of sex,” said Robert Block, MD, FAAP, American Academy of Pediatrics president.

“However, as physicians who care for our nation’s children, it is our responsibility to protect the health of our teenage patients, and an unintended pregnancy can have significant implications for adolescents’ physical and emotional health.”

Presumably Sec. Sebelius was following orders from her boss, already jittery because the U.S. Conference of Catholic Bishops is offended that HHS has had the temerity to acknowledge that contraception is a preventive medical service, and should be covered without additional co-payments just like pap smears.

You can join lots of important efforts to call the White House or sign petitions, including sites for NARAL, the National Women’s Health Network, and the Feminist Majority.

Maybe, also, we can snatch some tactics from AIDS activists. Maybe we need to start bird-dogging policy-makers who have difficulty living up to their promises.  And working in communities where people don’t have jobs are being convinced to turn their anger against women who don’t have rights.