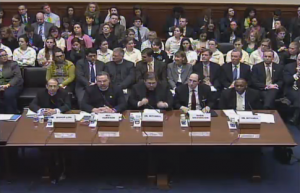 Hobby Lobby today announced that although it is a corporation, it does indeed have a religion: Boko Haram.  When its Christian owners argued before the Supreme Court to assert their right to deny insurance coverage for 4 types of birth control on the basis of the corporation’s religious beliefs, Justice Sotomayor questioned “How does a corporation exercise religion?”  The Corporation itself has so far been silent on its actual religious affiliation.

“With so many of our successful practices under attack around the globe this month, we felt it was time to speak publicly in defense of our faith,” the Corporation said.  “On May 6, a Boko Haram leader claimed responsibility for abducting hundreds of Nigerian school girls, planning to sell them.  In the U.S., with legislation in Missouri and Louisiana aiming to strip abortion providers of their right to practice, and in Congress to ban abortions after 20 weeks, when low-income women and women with medical abnormalities are most likely to need them, our staunch doctrine of assuring the long-term, structural subservience of women has been making enormous strides.

“The firing of Jill Abramson for her ‘brusque’ management style as NY Times editor, to be replaced by the man who had responded entirely appropriately to her by punching a hole in the wall at the Times, was simply more than we could have hoped for.

“This cascade of previously unimaginable successes has of course inflamed uncontrollably whiny, emotional, and humorless feminist apparatchiks around the globe, from groups like a Billion Rising, and the Trust Women/Silver Ribbon Campaign.   These modern women and their supporters would convince the US Supreme Court that it’s time to set the record straight and dismiss Hobby Lobby’s arguments, simply because they reflect the last gasp of the backwards, fringe mentality we represent. And frankly, the recent denunciation of Boko Haram by Al Qaeda contributed to prompting our declaration. By coming out publicly to claim our corporation’s religious affiliation with Boko Haram, we intend to put all such diversions to rest.”

(The corporation went  on to explain how this unique circumstance entitled it to claim its independent right to assert that Plan B should not be covered by Hobby Lobby because it is an abortifacient, which is otherwise labeled by mainstream scientific evidence as “absolutely without any foundation whatsoever.”)