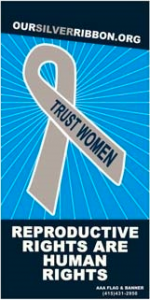 I love this poem, so had to bring it out again for the anniversary of Roe v. Wade. I think it sums up what I feel about repro rights and apathy for activism about reproductive rights/justice/health that I see out there. Those of you who found this are probably already GREAT activists, but please share this with friends, and please join us for Trust Women Week Jan 20-27 a National Online March for Reproductive Justice, Rights and Health.

First they came for the communists,
and I didn’t speak out because I wasn’t a communist.

Then they came for the Jews,
and I didn’t speak out because I wasn’t a Jew.

Then they came for me
and there was no one left to speak out for me.    —Pastor Martin Niemoller

The anti-women, anti-birth control, anti-freedom-of-religion people have taken over government at the National and State levels.

First they went after abortion coverage.

Then they decided  to redefine rape.

Then they are NOT allowing abortions in the case which the women would DIE without the abortion.

Then they voted on to defund birth control/pap smears/STD testing for financially-strapped women.

Now they have declared open season on killing abortion providers.

What’s next? Anyone who speaks up about abortion will be shot?

When will pro-choice (NOT the same as pro-abortion) Americans wake up, stand up and be counted?

Did you know that US the House of Representatives:

And US Senators are lying about Planned Parenthood on the floor of Congress!

TRUTH: only 3% of what Planned Parenthood does is abortions. The other 97% is STD diagnosis and treatment, pregnancy care, cancer screenings, etc.

And they are so emboldened that a South Dakota bill would legalize killing doctors who perform abortions!!

And Nebraska has decided to do the same but worse!

Here are a few great videos that everyone should see:

Hyde is NOT OK http://www.youtube.com/watch?v=zCmCcACrm6M

What:              National Online March for Reproductive Justice, Rights and Health

Please MARCH starting NOW and get your friends everywhere to march online!

When they overruled the FDA decision to send Emergency Contraception(EC) over the counter (OTC), last Wednesday, the Obama administration threw women, science, and birth control under the bus.

Some have said that failing to get EC for those 16 and under is no big deal because it affects so few, and that EC fails a lot.

Sure EC can fail, but what about the successes? Those people go on with their lives and don’t show up in the MDs office. We also see EC failure b/c of the delay in access — the longer it takes to get the med, the less likely it is to work. Allowing over the counter access results in earlier use and thus more likelihood for the medication to work.

Also, it is the principle of the matter – it is UNPRECEDENTED for the HHS to overrule the FDA. Who is Sebelius to override the nonpartisan FDA panel who reviewed the case? Who is she to overrule all the MDs from the AMA, ACOG, AAP, SAHM and  health providers/researchers from 30+ other medical organizations that have supported EC over the counter with NO age limit? Did she go to medical school? Does she see patients daily? Has she reviewed all the science regarding EC and adolescents? — the FDA panel did, the AMA, ACOG, AAP, SAHM did.  (click here for AAP.ACOG.SAHM statement condemning the HHS action) This ruling is a slap in the face to the entire medical and scientific community.

This was purely a political play, ignoring science, using anecdotal qualms reminiscent of the Bush days to counter science. President Obama and Sec. Sebelius were throwing out red herrings when they stated they had concerns about 11 year olds. What about the 15-16 year olds?

There is NO harm from an 11 year old taking this medicine. There IS harm from overdosing on acetaminophen, ibuprofen or taking aspirin with a viral illness in children but these meds are all over the counter. Why is this medication being treated any differently? POLITICS

Shame on President Obama for invoking his 2 daughters as justification. I invoke my 2 daughters and say, I will talk to my daughters about the dangers of over the counter medications like acetaminophen, ibuprofen, etc and I hope that he will talk to his.

Take Action and tell your friends about the Silver Ribbon campaign to Trust Women for Reproductive Rights and Justice.

Some great reference documents about EC and Adolescents

Excerpts from statements by major medical organizations about EC and Over The Counter access for adolescents (at the bottom of the page) by Advocates for Youth.

2008 brief on EC by the Bixby Center covering

For more information on AAP recommendations on contraception and emergency contraception use among teens please visit www.healthychildren.org/EC

Sen Kirsten Gillibrand on Women Need to WAKE UP and TAKE ACTION, VOTE
start at 9:39 (notice the Silver Ribbons on Sen. Gillibrand and EMILY’s list President)

“I Have Sex” — students speak out against ideological attack on PP …

Jackie Speier speaks about her abortion

Not Under the Bus

SisterSong has a series of ForePlay sex-positive pre-conference celebrations

These events will have cultural and political art, fiery performances and VIPs like you!

Their conference is July 14-17 in Miami

4/2 6pm in Chicago Pro-Choice Counterprotest at the Joe Scheidler Tribute!

don’t let the government Throw Women Under the Bus

Rep Gwen Moore in opposition to the Pence Amendment

You can make a video and upload it to youtube for the My Health Matters campaign. Talking about how your health or a woman that you care about is important and should not be endangered by government ideological political battles.

the House voted to defund all family planning for Title X clinics.

check it out! Raven Geary has spear-headed another round of Walk For Choice

join the Walk or start one near you!